ROCKEFELLER did not disappoint, showing himself to be sure and firm, thus becoming one of the six or who would pass to the tiebreaker among the 39 pairs participating in the Grand Prix.

Eduardo Álvarez Aznar knew that this was one of his last opportunities to be in the grand final for the second consecutive year and that they had to be very fine, since the track manager was going to set a very demanding course for the occasion.

The tiebreaker was won by Daniel Deusser with TOBAGO Z, who, with this, added his third victory after the Verona and Ifema Madrid Horse Week. The German, was the only one of the five riders who repeated a zero in the jump-off that could be below 47 seconds. Second classified the Belgian Gregory Wathelet, with “Iron Man van de Padenborre” and in third place Eduardo Álvarez Aznar with Rockefeller, with which he obtained the place for the World Cup Final occupying the 15th place of the table after the 13 venues. 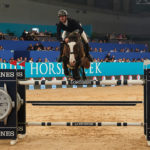