The Catalan and the Basque must be proud after their performance in this event. The IFEMA MADRID HORSE WEEK Main Arena seems to bring luck to both Spaniards, who always finish each edition with at least one podium each.

The CSI2* RODILLA TROPHY has not been an exception. The large CSI2* class, with a height of 140 cm, was the perfect setting for Otti Verdú with her incredible mare, Top Lulu, and Kevin González de Zárate riding Urban des Grezils, to win the gold and silver medal respectively. The young rider from Reus stopped the clock in an impressive time of 17.99 seconds, while González de Zárate followed her with 18.06 seconds.

Third has been the Egyptian Sameh El Dahan riding Miss G Tracey that endend up very close to the Spaniards, with a time of 18.12 seconds.

SUMMARY OF THE FIRST DAY OF IFEMA MADRID HORSE WEEK

SUMMARY OF THE SECOND DAY OF IFEMA MADRID HORSE WEEK 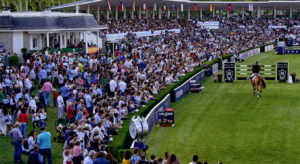