The Board of the MHW Foundation and the Organizing Committee of IFEMA Madrid Horse Week have unanimously decided to grant the IFEMA Madrid Horse Week Award in its seventh edition to Mr Fernando Martínez Albornoz, “Pichi”, one of the most relevant figures in Spanish horse riding for more than 6 decades, in recognition of the trajectory of a lifetime in the discipline of jumping obstacles.

The commemorative event will take place on Sunday December 1 during the development of the Grand Prix of Longines FEI Jumping World Cup, Ifema Trophy, which will begin at 1:00 p.m.

At 87, Pichi continues to ride every day and compete whenever he can and, he says, it is clear that no one will get off the horse because “life from up there is much better.”

Since discovering the horse riding as soon as you enter the military academy of Villa Sanjurjo, Morocco, the rider, always competitive, accumulates more than five hundred prizes, including 32 Grand Prix such as Burgos, Zaragoza, Oviedo, Logroño or Santander and even, in 2018, bronze in the Spanish Veterans Championship. But also his body has received innumerable blows derived from the more than 400 falls that have had to overcome.

Born sportsman, he crossed the Atlantic under sail, was a military ski champion and Basque champion of trampolining, but it was always clear that the riding was different from the rest of sports “in most sports they put you on the ground immediately and, on the other hand, the horse is very generous, it is special ”Said and done, at 87, Martínez de Albornoz has become an example to follow in the world of Spanish horse riding and for that reason and for the wonderful character that character will receive, this 2019, the IMHW Award. 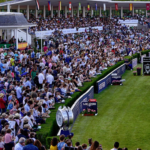 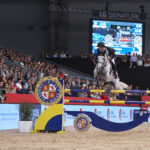