Changes in the second day of the Dressage World Cup at IFEMA Madrid Horse Week. This afternoon the city arena held a spectacular Kür, a high-level competition under a full house, in which Helen Langehanenberg crowned herself as the great winner of the event. The German, who now replaces her countrywoman Dorothee Schneider in the provisional ranking, was the last on track with the elegant mare ‘Annabelle 110’. Both signed a magnificent performance, the talented daughter of «Conteur» nailing the challenging contest and posting the winning score of 80.5.

Langehanenberg pinned the Spanish Beatriz Ferrer-Salat who gave her true level with ‘Elegance’. The son of ‘Negro’, with a great future, did not have the tensions of the day before and was calm, shining again in pirouettes, passage or piaffe on the Dressage & Music composition for a score of 79.220.

Precisely the Villa Equus and KPWN were the first pair on track, which means the leadership did not change and was only approached by just over a point by Juan Matute and ‘Quantico’. The Madrid-born rider tied perfectly with the audience riding the son of ‘Fighting Fit’ and performing an expressive and flawless test with 78.160.

After the young Spanish came the two Germans of this third leg of the FEI Longines Dressage World Cup. However, the still leader of the ranking, Frederic Wandres, could not achieved the previous performance with ‘Bluetooth Old’. The 11-year-old played inaccurate and without understanding its rider, leaving the test with a score 77.230 and jumping to the fourth place.

The French Morgan Barbançon and ‘Sir Donnerhall II Old’ closed the top 5 after an explosive test, close to the Dutch Thamar Zweistra and ‘Hexagon’s Double Dutch’ and the Portuguese Rodrigo Torres with ‘Fogoso’, who even got a big applause halfway through the test after some changes to a hand.

«I am very proud of her, of her result, of how she travels,» commented Helen Langehanenberg, the winner of this Grand Prix World Cup – Grupo Eulen Trophy at the press conference. The German also highlighted the electric touch of the daughter of ‘Conteur’. «There was a very good atmosphere for riding on the track,» she praised, adding that it was her first time in Madrid. «But I think it won’t be the last,» declared.

Following these results, the German Frederic Wandres is even further ahead in the world ranking with 57 points, followed by Thamar Zweistra with 43 and Morgan Barbançon with 40. 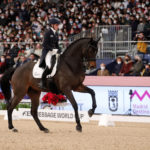 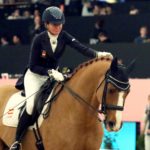