Marcus Ehning stole the show on the last day of IFEMA Madrid Horse Week. The German and Pret A Tout won the Longines FEI World Cup Grand Prix, IFEMA Trophy with a very fast run, “the horse has a lot of experience and he is very quick so my goal was to beat Pieter Devos”, Marcus said. The podium was completed by two other spectacular riders, Christian Ahlmann, who said he, “did not expect to be in the podium because my horse is very young and in fact entered the arena slightly scared”, and Pieter Devos, after the Madrid leg is now number one in the Western European League ranking. In the Press conference with the three top riders and Alvaro Arrieta, the best Spanish rider Carolina Aresu was also present who managed a very good run, only finishing with 4 penalty points. She said, “I feel very comfortable with my horse and this was my third 5* Grand Prix with him”.

It was difficult to repeat yesterday’s day, in which the Spanish riders took home the gold of the five jumping trophies; among them, the Olympic Sergio Álvarez Moya, was undefeated in the CSI5* Alfonso X El Sabio University Trophy of 1.50m. However, on the last day of the IFEMA Madrid Horse Week, the  Spaniards maintained a good standing and started the day with a podium that was one hundred percent Spanish.

Finally, at 1:00 pm, the star of all the IFEMA Madrid Horse Week events, the Longines FEI World Cup Grand Prix, began. Marcus Ehning and Pret A Tout achieved the victory with a very fast and fine run, in an intense jump off between nine legends. The crowd roared in excitement on a standing ovation after the German managed an even better time than Pieter Devos (43.66) who has just gone before him. But Ehning, who already in 2016, won the World Cup Grand prix also in Madrid, was able to take advantage of knowing that he had to be quicker with his 16-year-old horse and managed an unbeatable time of 43.30 seconds.

Christian Ahlmann also made a brilliant round with his young Dominator Z, but he exceeded his compatriot’s time by just 0.23 seconds. After receiving the second place in Madrid, the rider has acknowledged that he did not expect such a successful result from his 9-year-old black stallion. Although defeated by the Germans, Pieter Devos has been having his best year. He won in Stuttgart, he won third place in Lyon, and also this weekend in Madrid where he also achieved back in 2015, which has allowed the Belgian to climb to the first position of the Western European World Cup ranking.

Before the jump off, a total of 40 opponents faced a very technical 1.60m course with complicated combinations designed by Javier Trenor. On this occasion, the Spaniards lost their opportunity after Eduardo Álvarez Aznar and Sergio Álvarez Moya retired from the course.

The CSI2* 1.45m Marca Trophy ended this fantastic weekend. The last rider who has finished victorious from the IFEMA arena Madrid Horse Week was the Spaniard, José Fumero, thanks to his good performance with his 11-year-old mare Donita. From about thirty participants of the last competition, only three riders succeeded to a small jump off. The second place has been awared to the Argentine, Rosendo Bidart, who was eliminated after falling from Enriques of the Lowlands in the jump off, and the second position given to the Portuguese Bernardo Ladeira and his stallion Dento, who knocked down two bars.

As on the previous days, the Salon del Caballo was full of activities and exhibitions. The Non-Stop Track hosted exhibitions from other types of disciplines: horseball, vaulting, indoor cross and horse rides. In the afternoon, a Lusitanian thoroughbred danced for the attendees and the magic of Paco Martos and his horses entertained the fans.

And so an exciting and thrilling 3 days of competition and shows have ended where the national riders have made their local fans proud. 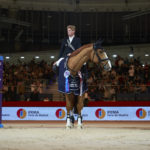