Second and consecutive Spanish triumph at the CSI1* in the middle of IFEMA Madrid Horse Week. After the victory of Carolina Villanueva in the first course, the Rodilla Trophy of 1,40 meters, the Spanish riders continued the wins in the Ciudad de Madrid Trophy, since Alba Valle and «Tresor de Varende» beat once again all the pairs.

The Madrid-based rider and the son of «Esprit de Conquete» are having a magnificent performance this weekend and with one last day to go they are keeping an unblemished record.

About twenty riders took part in the second course of the day, half of them without faults. Two seconds took away the gold from the Portuguese Alfonso Salvador Bento with «Oros M», who finished in second place. The Galician rider Ismael Rozamontes got the third position with «Huracán». 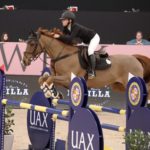 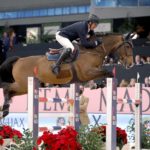