Alba Valle unveils the list of winners of the CSI1*

First play and first Spanish triumph. The Spanish riders set the pace at the start of the one-star international competition that runs along with the five-star World Cup. The first test, the IFEMA Madrid Horse Week Trophy, was played on Two Phases, with eight obstacles in the first phase, including a double (oxer and vertical), and a shorter second phase, with four obstacles and a double vertical.

At the beginning of the play came the first double round without faults, signed by the Spanish Esther Llácer with her veteran «Safir III». She marked 27.62 seconds on the chronometer, a record that was improved on several occasions throughout the course.

Shortly after arrived the second double zero, Alba Valle Espinedo with another experienced horse: «Tresor de Varende». Her time of 24.09 seconds led the rider living in Madrid to victory, despite jumping at the beginning of the test. Pedro Fernando Mateos was the closest to her chronometer, just in the final sprint, with a horse that has been in his stable for a very short time, the CDE «Perhaps CC», finishing with 24.99 seconds.

After the two Spanish qualified the young Diego Loira, a rider from Costa Rica who is competing with «History», the horse that Mariano Martínez Bastida usually rides. Zero faults in 26.72 seconds. Esther Llácer had started clear on «Safir III» and finished the course with a new double zero with her second option: «Benhur». The Valencian rider was classified among the best with both of them: fifth with «Benhur» and sixth with «Safir III». 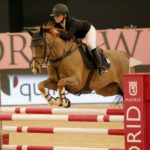 Swedish triumph in the Exterior Plus Trophy 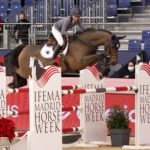