The provisional leader of the European World Cup league, Frederic Wandres, won the first place on “Bluetooth OLD” in the Grand Prix – Grupo Eulen Trophy. The German, who did not travel with «Duke of Britain», his choice in the two previous venues, was the third on the track with his young Oldenburg and no pair could beat their 71.895, demonstrating the power of his stable under the gaze of the German trainer Monica Theodorescu, based in Madrid.

The Spanish Juan Matute and «Quantico» stayed close in a very expressive test without failures and with a remarkable gallop with the son of “Fighting Fit”, confirming, if necessary, his return to the first level of dressage. Although there was no pair clearly superior to the rest, they offered a dazzling performance, show a good average level and a lot of equality, with up to six teams above 70 on average.

Third place went to another German, Helen Langehanenberg, with the mare «Annabelle», only three tenths behind Matute and half a point below her compatriot Wandres, who after failing a pirouette suffered on the final central line, with some tension in the daughter of «Conteur» that prevented them from taking the first place.

Above 71 was also the French rider Morgan Barbançon with “Sir Donnerhall II OLD”, followed by the Portuguese Rodrigo Torres with the magnificent “Fiery”, which today had some imperfections. Juan Antonio Jiménez and “Euclides Mor” were the next Spanish pair, seventh position near 69 percent.

The test concluded with the prizes ceremony hosted by María José Álvarez Mezquiriz, Executive President of Grupo Eulen, leaving the discipline to the next step, the spectacular Grand Prix that will also take place tomorrow in the afternoon session. 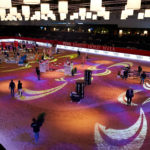 Experience leads David Will to victory in the ¡Hola! Trophy 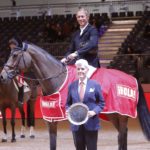