Denis Lynch and Carlos Hank tied in the Six Bars

Great atmosphere at the end of the opening day of IFEMA Madrid Horse Week. The Six Bars IFEMA Trophy closed the heavy schedule that started early in the morning. The first trail were six verticals in two lines, one of two fences and the other of four of them, with the last one at 1,60 meters height.

Only nine riders entered the course, including the Spanish Cayetano Martínez de Irujo with “Dearest Diamond RS”, who could not go to the second round after his fault. Neither could the Swiss Martin Fuchs, up in the top ranking, with «The Sinner». Of the nine, five tried to fly over a vertical of 1.70 meters.

A second round in which only three pairs made no fault: Marcus Ehning with «Funky Fred», Carlos Hank Guerreiro with «H5 Sunshine» and Denis Lynch with «Visa Z». The final fence at 1.80 meters defeated the three riders: the three failed and had to play a tiebreaker on the same heigth. While Marcus Ehning chose to leave, Carlos Hank Guerreiro and Denis Lynch broke the final line and shared the first place. 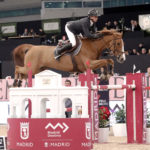