[In the near end of the week, from the 7th to 10th of February, will take place in Bordeaux the Western European League of the Longines FEI Jumping World Cup.

Since 1978, Jumping International of Bordeaux he was one of the most important members of society, as well as in previous periods, especially for leisure at Jumping. During 4 days, the arena  is always full and, sometimes, the stars give way to fans (Antares Championship), but also to young riders with Super As Pony Elite events or the young stallions of 7 and 8 Bordeaux Young Sires Masters.

On Thursday, 7th of February  there will be an equestrian show, called the Iberian Night; that counts on the schools of the Royal Andalusian School of Equestrian Art of Jerez and the Portuguese School of Equestrian Art of Lisbon, a great staging where we will also find the Iberian horses Cadre Noir de Saumur and those of the troop of Until Later. A unique encounter between the three main art academies.

In this last stage of the League it will be decided which riders have classified and picked up a score for the Final of the Western European League of the Jumping World Cup that will take place in Göteborg (SWE) from 3rd to 7th of Apri, 2019. 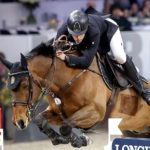