The first day of the fourth edition of the ‘Maestros de la Vaquera’ Cup has taken place this afternoon at the IFEMA Madrid Horse Week. For now, Luis Fernando Benítez and “Luar” lead the ranking.

Nine pairs are participating in this fourth edition of the high-level competition of ‘country dressage’. The event, which brings together the best couples from the Spanish Championship and the S.M. El Rey tournament, has once again retain many fans attention, a public that enjoyed this traditional discipline.

Precisely the one and only horsewoman of the course, Rocío Ramírez Palacios, was the first to enter the track on “Fandango”, obtaining a score of 266.17 that lifts her to the finest positions, provisional fourth place for now. However, the Spanish champion Luis Fernando Benítez with the Lusitano “Luar” achieved the best mark in this reprise, 286.70, which leaves him at a great distance from the other competitors.

The grand final will take place tomorrow afternoon, in pavilion number 14 of IFEMA, with the Grand Prix reprise, which will decide the classification of the best pairs in this ‘Maestros de la Vaquera’ cup. 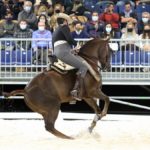 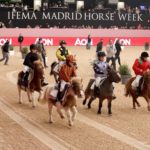