The most important course on the opening day of the CSI5* IFEMA Madrid Horse Week, the fourth competition of the Longines FEI Jumping World Cup, was the Ciudad de Madrid Trophy. A demanding test that finished with an exciting jump-off that became a tribute to speed. Only six of the 44 participants could managed a clear round on the track designed by Javier Trenor, filled with 12 obstacles and 15 efforts, with a double vertical that closed the penultimate line and became the big trouble.

Many made their only mistake in one of its two elements, like the Spanish Eduardo Álvarez Aznar with his new “Bentley de Sury”, who finished with 4 points. After the double, the last street, which began with an oxer followed by a soft turn to a vertical and the oxer that closed the route, a fence in which Sergio Álvarez Moya committed his only fault with “Malibú de Muze ”.

Until the appearance of Denis Lynch and «GC Chopin´s Bushi», eleventh on the track, the spectactors could not enjoy any. Almost next, the also Irish Michael Pender achieved the coveted zero with “HHS Calais”. Before reaching the middle break to prepare the arena, the Belgian Pieter Clemens with «Hulde G» and one of the greatest players of the season, the French Olivier Robert with «Vangog du Mas Garnier» joined the flawless list. After the break and already in the final stage, the Brazilian Eduardo Pereira de Menezes earned his zero points with “H5 Chaganus”, and later on the French Julien Epaillard with “Billabong du Roumois”.

The full grandstand of IFEMA pavilion cheered up the pairs in the jump-off where riders beat the clock one after the other. Julien Epaillard closed the fast-paced jump-off with the son of “Mylord Carthago”, proving he is one of the fastest of the international circuit. His 34.22 seconds overcame the 34.30 seconds target of the Brazilian Eduardo Pereira de Menezes and the son of “Chacco-Blue”, who earned the second place. Michael Pender with “HHS Calais” in 34.95 seconds won the third position. 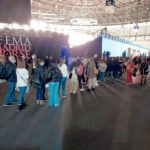 Denis Lynch and Carlos Hank tied in the Six Bars 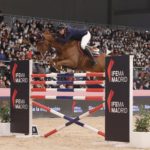