The final day of IFEMA Madrid Horse Week began with the triumph of Kevin González de Zárate, who won his first victory of the weekend at the CSI1* Gilmar Trophy, a 1’25 meter height test with 25 participants.

The competition witnessed its most exciting moments in the final sprint. Alba Valle and «Tresor de Varende», winners of the previous days, stepped on the track determined to reach their third consecutive gold. They made no fault in a time of 52.95 seconds, which appeared enough to maintain their full of victories, since they lead the classification.

But there were still ten pairs to go – among them, Kevin González de Zárate with «Recesvinto». The rider from Vitoria, who had not yet tasted the sweetness of victory in this edition, was two seconds faster than Alba Valle and took his first win in 50.62 seconds, getting rid of the bad feelings from the previous day with the son of «Rey Z», when he could not finish the Jump & Drive test despite that they were great favorites.

Alba Valle finished in second place and closed her good weekend. «I am very happy. It’s been forty days since I’ve been on a horse. I’m studying in London and I came on Thursday to prepare for the competition. Now, after the competition, I’m going back to London», the rider born in Córdoba but settled in Madrid for many years told Equestrian magazine after the prize ceremony.

Esther Llácer climbed to third place with the experienced «Benhur», confirming their good evolution throughout the weekend. They opened IFEMA Madrid Horse Week with a fifth position, climbed to the fourth on the second day and have finished today’s test with bronze. The Valencian and her 17-year-old CDE son of «Dobel’s Cento» did not see a rail down.

Along with the podium, the Gilmar Trophy’s top ten was also dominated by Spanish riders, who filled the first nine places in the standings. José Fumero is having a good competition with his two young horses. The 6-year-old son of «Upsilon» «Figuier du Roc» from Yeguada Villafranca, despite being the youngest horse in the Gilmar Trophy, proved to be the fastest. Fumero set an unbeatable clock of 49.40 seconds, the only one below 50-second barrier, but one fault took the victory away from the Canary Island rider. 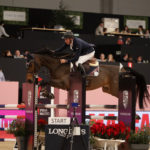 The last dance of Beatriz Ferrer-Salat and "Delgado"